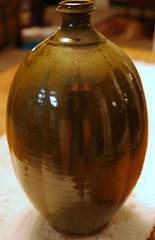 Meredith Veto at d/visible has written an excellent piece on one of my favorite potters, Ben Owen III, who lives down the road from Seagrove, NC, in Moore County. Pictured at right is one of his pieces that I bought in, my god, 1998.

“Country potters used to make things for everyday life, like jugs for storage. My grandfather, while he was working for Jugtown, looked at the Orient and began making decorative designs, away from utilitarian purpose.” Owen had previously traveled to Japan in order to immerse himself in the culture that had inspired his grandfather, who embraced the simplicity of Asian artistic traditions: “It’s easy to make things complicated,” he would say. “The challenge is to keep things simple.”

Veto notes that Owen, whose grandfather was known as North Carolina’s Master Potter, has been designated a “North Carolina Living Treasure.” I say he makes treasures.

Owen is one of the leaders in creating a rival pottery festival this year in Seagrove on the weekend before Thanksgiving. There will be dueling pottery festivals that weekend.