A day golf’s Mike Strantz would have enjoyed 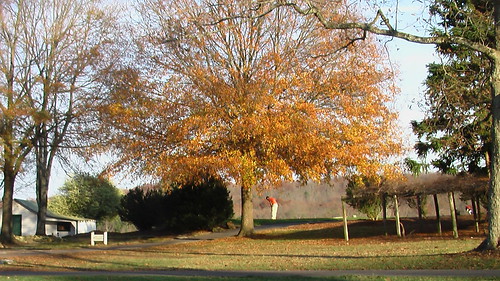 I don’t play golf and I never met golf course designer Mike
Strantz, but I think he would have had fun yesterday on a sunny day with a bit
of crispness and trees still holding some gold fall color across the rolling
landscape of Piedmont North Carolina.

The weather was splendid, the golf was good and the ribs,
slow cooked for some three hours, were excellent.

The video shot nine years ago of the construction at Tot
Hill Farm Golf Club shows a guy with a twinkle in his eye, a smile on his face
and obviously loving what he is doing.

Strantz died at 50 of tongue cancer. By that time, he had
become a hot talent in golf design known for challenging and controversial
designs.

He began his career as a golf course designer with the famed
Tom Fazio, but did a mere nine courses after going out on his own.

Two of the nine are in North Carolina, Tot Hill in Asheboro
and Tobacco Road in the Sanford area. On Saturday, Tot Hill held the First
Annual Mike Strantz Memorial Golf Tournament, attracting over 100 golfers.

His dad was there. His two daughters were there. His wife,
Heidi, spoke briefly about how the proceeds would help the Hollings Cancer
Center of South Carolina, located on the campus of the Medical University of
South Carolina in Charleston, S.C.

Strantz would have been proud.

(Mike Strantz photo from www.mikestrantzdesign.com. Some more photos from Saturday.)