Where journalism gets reinvented 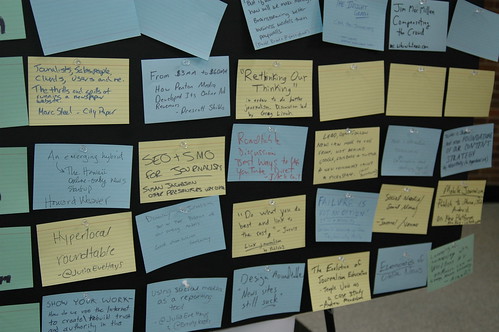 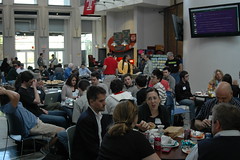 A group of what Stowe Boyd calls Edglings gathered at Temple University in Philadelphia on Saturday for a day long Barcamp focused on news innovation.

This group was far from the hotel gatherings of American Society of News Editors, the Newspaper Association of America and the National Association of Broadcasters, all of which were held earlier this month.

A Pew Research Center’s Project for Excellence in Journalism survey of top newspaper and broadcast newsroom managers found, according to the news release, “fewer than half of all those surveyed are confident their operations will survive another 10 years–not without significant new sources of revenue. Nearly a third believe their operations are at risk in just five years or less.  And many blame the problems not on the inevitable effect of technology but on their industry’s missed opportunities.”

Grim realism, perhaps, but not a hospitable petri dish for culturing innovation.

At the Temple gathering, called BCNI Philly, there were 118 or so from Los Angeles to New York who showed up at the university’s Annenberg Building. They were eclectic: Young news and technology geeks, seasoned traditional journalists trying to refashion careers, software developers with visions of the future, mainstream journalists looking outside their box, enthusiastic journalism students full of hope and ambition and others just eager to carve a space in the media landscape.

In addition, the Twitter stream from the event is recommended reading.

It was a great reminder that innovation in media and journalism will happen at the fringes where the Edglings play. BCNI Philly is one of the outward signs that journalism and the business models that fund journalism are being refashioned in exciting and previously unthought of ways.

Adversity is a mean teacher