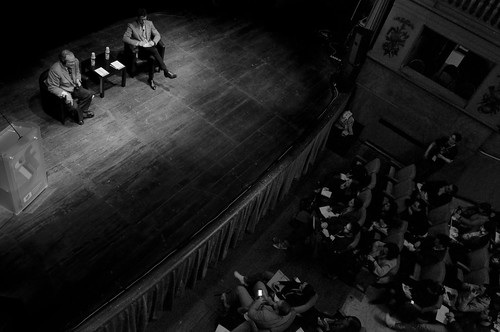 If you were thinking that the Internet ruined journalism, you’d be wrong; it’s competition and free enterprise that destroys the noble profession.

At least that’s my reading of Paul Steiger‘s speech last week as part of the Ralph McGill lecture series at the University of Georgia. He says many items are published on the Internet merely to generate page views to feed the CPM model of advertiser-supported media

In his day, it was, … well, not so different. Steiger recalls many similarities between news coverage today and what it was when he was a “kid reporter” at the Los Angeles Times in the 1960s:

When I was a kid reporter at the LA Times in the 1960s, some of the veteran photographers and reporters regaled me with tales of how they used to sit in their cars with motors running, radios tuned to the police band, so they could be first on the scene of a gangland slaying or a spouse-stabbing, the bloodier the better.

There weren’t one or two papers competing for audience, but six or seven, and the more lurid the page-one photo, the hotter the per-copy sales, which were the lifeblood of circulation in those days.

There was serious stuff in the papers, too, like Korea and the Cold War and polio vaccine, but much of that was available to everyone and left to the wires to report. The premium, then as now, was on speed.

In betwixt then and now, newspapers culled competitors and gained monopoly markets. Steiger says the monopolies metro newspapers enjoyed for decades allowed for high quality journalism and even ethics. Huge profit margins allowed the expensive kind of investigative journalism that is part of the “fundamental underpinnings of our democracy.” Heady stuff for the beneficiaries of monopolist media.

Now that on the Internet anybody can be a publisher, the monopolies are in declined or no longer exist. Also in decline or no longer exist are the huge profit margins. We’re harkening back to the lurid photo (now the “sexy celebrities on news aggregation sites “> and bloodier the better (or “pointless exotica as a come-on for international or national news”) to attract audience.

Maybe monopoly newspapers benefited society even as they enriched their owners. Maybe telephone service was better when there was only Ma Bell. Maybe, TV news was more responsible when there were only three networks. Maybe what was good for GM really was good for America. And maybe Standard Oil really did have our interests at heart. Even so, it’s doubtful we’ll go back.

One point that I think Steiger did nail was on the need for transparency within the media, ranging from the sourcing of information (sharing documents and data) to the process of the reporting and even to “business-side” information.

For Steiger, the alternative to the problems of funding journalism without a monopoly, is the non-profit. He is editor-in-chief and led the launch of ProPublica.org, a non-profit, non-partisan news organization doing very fine work. Nonetheless, it’s done outside the fray of free enterprise and market competition. It may be one of the new models of media, but I doubt it will become the dominant model.

(Photo of Paul Steiger taken by Luca Sartoni on April 23, 2010 and used under a Creative Commons license.)