It’s been a bit of a buzz for some time now, years even, but one of the technologies approaching wide-scale use that is likely to upend current journalism in augmented reality. 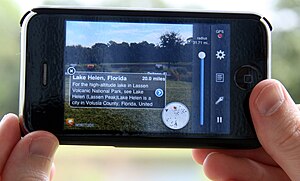 It not only threatens to further disrupt the advertising-supported model of most traditional media, it will bring new journalistic story forms, tools and platforms.

The question of what’s next to journalism is our February topic of the Carnival of Journalism and was put forth by long-time digital journalist Steve Outing who posed the question this way:

“What emerging technology or digital trend do you think will have a significant impact on journalism in the year or two ahead? And how do you see it playing out in terms of application by journalists, and impact?”

The promise and the hype of Augmented Reality has been around for awhile, but new technologies never really catch on until they get close to “even-my-mother-can-do-it” simple.

AR is getting there.

Just in recent days come reports that Google will begin marketing Google Goggles later this year. Talk about geeky glasses, these are said to look like Oakley Thumps, run the Android operating system and be much like smartphones with GPS sensors, 4G cell service and inputs/outputs for video and audio.

At the prestigious Sundance Film Festival toward the end of last month, documentary “Hunger in L.A.” from former Newsweek correspondent Nonny de la Pe�a got a lot of attention as an immersive piece that went beyond just showcasing gee-whiz technology and actually told a compelling story.

Georgia Tech has been doing a lot of work around its Argon augmented reality browser and software that let content creators instead of programmers create AR presentations.

For most of my World of the Future predictions I rely on what Dick Tracy was using in the comic strip that ended in 1977. The two-way wrist radio, for example, was introduced in 1946; the two-way wrist TV in 1964. Looking back 50 years, so far for me at least, has been a pretty good forecasting tool for what might be hot next. It will be fascinating to read all the other Carnival of Journalism outlooks for the future. A round up should be posted by early next week; several are already in as I write this.

Some could say, and some will undoubtedly say, news organizations have been experimenting with story telling with AR for four or five years or more. And that’s true. The problem: Consumers were not experimenting with them. It has been chest-thumping tech, cutting-edge cool, and completely irrelevant.

Now, however, trends and technologies are converging. Powerful smartphones can run easy to use AR software. Consumer products like the forthcoming Google Goggles are coming. Content creation tools are available that don’t require a team of hackers. Coupled with open standards, this segment is poised to redefine what is “a story.”

Watch for the signs!