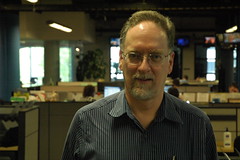 The Social Media Day at the Associated Press Media Editors Conference at the John Seigenthaler Center in Nashville turned out newsier than I had anticipated. It had the “time-suck” that went viral in the world of digital journos.

Steve Buttry, an executive with the Digital First Media newspaper group and a former editor who has also trained hundreds of working journalists, took note on his well-known journalism blog, The Buttry Diary, of a comment by Associated Press Political Editor Liz Sidoti in the opening panel on Friday that Twitter is a “time-suck” threatening young journalists’ understanding of the basics in reporting.

Buttry was following the APME and Online News Association conferences when Sidoti’s comment was Tweeted out of the room in Nashville.

Buttry’s “stark contrast” or “time-suck” blog post, written while he was in San Francisco at the ONA  Conference, immediately drew attention from attendees at both gatherings and others.

Chiming in from #ONA12: @ap‘s Liz Sidoti has a point. Use social media judiciously, not at the expense of shoe leather. #apme2012

Those two are but a small sample.

The blog post has since been updated a few times with additional information, including  video of the panel Sidoti was on. And, after watching the video of the panel, Buttry said nothing has swayed him from his original post.

[email protected]stevebuttry is spot on with his assessment here, esp. in my experience with Sidoti. Hostile to all new media. stevebuttry.wordpress.com/2012/09/21/apm…

Steve Yelvington, a digital news veteran who was on a panel just after Sidoti’s also weighed in, writing:

Like the universe, journalism is expanding. AP plays a shrinking role in that universe, at the head end of the reporting process on primarily world and national news. Journalism used to be describable as “gather, order, and present” — or reporting, writing and publishing. AP lives in the first two layers, disconnected from and sometimes baffled by the rest.

But that’s not the process any more. Journalism doesn’t end with publication of a story, or even necessarily begin with the reporter. Journalism now is a dynamic and continuous process that can begin with the “people formerly known as the audience” and continues after publication in a public, social interaction in which the community discusses, digests, processes, adds to, remixes and redistributes information.

Also, don’t miss Rex Hammock’s post on what he told editors (or wished he had). A peek:

Of course, that is a critical facet of what is taking place, however,
there a many things that are huddled under the “social” umbrella that
have nothing to do with “social”: Here are a few: 1. Incredible new
tools and channels that allow me to personally record, create and edit
HD video, photography, audio, text and distribute them to a worldwide
audience. It’s something individuals can do in a very unsocial way, if
they choose. I think the term “social media” is yet another term that
helps legacy media view themselves as bastions of something unique and
above the babble — as if there is “mass media” and “the media of the
masses.”